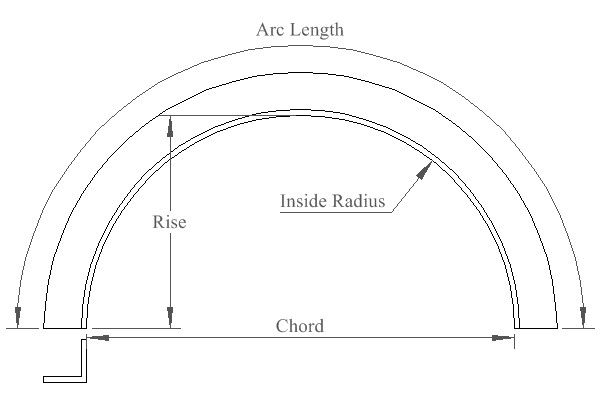 American Institute of Steel Construction (AISC): With headquarters in Chicago, AISC is a not-for-profit technical institute and trade association established in 1921 to serve the structural steel design community and construction industry. Chicago Metal Rolled Products is an active member of the Benders and Rollers Committee of AISC

Arc: The curved portion of a bend

Arc Length: The length of a bent/rolled surface

Bend Radius: The arc of the bend itself, usually taken at the centerline. The distance from the center of curvature to the centerline (axis) of the pipe, expressed as a number multiplied by the pipe or tube size. For example, the bend radius of a 5 x D bend for a 2-inch nominal pipe size (NPS) pipe or a 2-inch tube is 10 inches (see centerline radius)

Buckling or crippling: The collapse of part of a section. For example, the web of a beam might collapse under the pressure of hard-way bending

Center to Center: The distance between the theoretical or calculated centers of two adjoining bends on the same plane. Also used for diametric measurement between the centerlines of two tangent points of a bend (i.e. 180 bend, for which the center to center distance will be equal to twice the centerline radius)

Centerline Radius: The distance from the center of the curvature to the centerline (axis ) of the pipe

Chord: The straight distance measure between the centerline points of any two points of a bend

Circular stairs: Stairs that turn right or left as a person walks up them

Cold Bending (“Pyramid” Rolling): A steel member is placed in a machine and curved between three rolls

Degree of Bend: The angle to which the bend is formed

Diameter: A straight line passing through the center of a circle

Distortion: Any departure from specified dimensions, usually in reference to mill tolerances. Note: Occurs in every rolled part to some degree

Easy way: Bending a section against the weak (y-y) axis. A rectangular bar bent the easy way into a circle would look like a belt

Hard way: Bending a section against the strong (x-x) axis. A rectangular bar bent the hard way into a circle would look like a metal washer. With beam bending the hard way, the web usually has to be held in tension to avoid crippling

Helical bends: Often wrongly called spirals (spirals have varying radii but are bent in one plane, like a hose coiled on the ground or a heating element on an electric kitchen range). True helixes are used to create a circular staircase and can also be bent into 3-dimensional elliptical shapes

Hot Bending: Bending is achieved by applying heat directly to material by internal or external flame, or heating in a furnace

Induction Bending: An electric coil heats a short section of a structural member, and then it is drawn through a process similar to rotary-draw and cooled with water directly after

Non-ferrous metals: Metals that do not contain an appreciable amount of iron

Off-axis bending: When a member is not rolled on either of its two primary axes

Oil canning: Irregular warpage of a section of steel

Ovality: With round tube bending and bending of pipes, the difference in dimensions of a circular form comparing the largest dimension A to the smallest outside dimension B divided by the nominal OD

Pitch: The height of a helical coil expressed in rise over run terms, e.g. a common pitch for stairs is 7/12, i.e. a 7in vertical rise is matched with a 12in horizontal run

Point Bending/Gag Pressing: Bending is achieved by applying a select number of point loads at varying increments along the length of the steel member

Profile tolerance: The variance allowed between the actual arc of a section and the specified radius

Radius: A line segment that joins the center of a circle with any point on the materials circumference (see centerline radius)

Rise/Mid Ordinate: The distance of offset between the midpoint of a chord and an arc, perpendicular to the chord

Roll bending: The metal stock is fed into the roller bender, which is usually built in a three- or four-roll configuration, and the lower rollers push against the feed path to force the metal stock into a predetermined bend design. The machines are also called section benders or angle rolls

Rotary draw bending: Used for tube bending and bending of pipes. The metal stock is supported against a mandrel and a rotating tool provides the bending action

S-Curve: Bends occur in the same plane, but in opposite directions

Section Modulus: The strength of structural metal stock as determined by the formula S + I/c, where I is the moment of inertia of the cross section about the neutral axis and c is the distance from the neutral axis to the outermost fibers. For example, Chicago Metal’s capacity for the bending of beams exceeds 1,000 cubic inches

Slope: Calculated as the rise over the run of a segment

Shrinkage: The reduction of a section’s dimension as the result of the pressure of bending

Spiral bends: Sections bent in one plane with an increasing or decreasing radius

Synchronized Incremental Cold Bending: Performed by applying pressure in a highly synchronized fashion at several locations along the steel member

Tangent: Straight section of material on either side of the bend or arc. May be any length. In order to make the bend itself, there has to be sufficient material at each end during the bending process. Excess may be trimmed after

Tangent Point: The point at which the bend is started or ended

Three Dimensional Bending (3D bending): Think of a roller coaster where you might not have a discrete shape like a helix or cone, but which hits x,y,z points in spac.

Trim, waste, pick-up, tangent, grip, run-off, lead in and lead out: All these terms refer to the amount of extra material required in the bending process because it is sometimes difficult if not impossible to bend material to the very end of the material. Please consult with us regarding the required lengths. The waste can be reduced by grouping multiple pieces in longer lengths to be rolled. Chicago Metal Rolled Products can roll lengths up to 105 feet

Wall: The thickness of tubular material, usually expressed as “nominal” or “minimum”

Wall thickness: The thickness of the material

Waves: Distortion of a sinuous nature of a section that should be smooth

Wrinkles: Definite folds, creases or ripples formed on the surface of the pipe during bending operation

Yield Point: The point at which material will deform permanently during bending

Yield Strength: The stress at which a material exhibits a specified deviation