The National Museum of the United States Air Force houses many rare aircraft which hold both historical and technological importance.  As well, a great deal of memorabilia which highlights the history of aviation can be found there.  It has origins going back to 1923 with the collection of some early artifacts and has expanded over the years, getting its current facility in 1971.  The museum is located at Wright-Patterson Air Force Base northeast of Dayton, Ohio and has over 360 aircraft and missiles on display and is visited by over 1.3 million patrons each year.

Recently, an expansion was planned to add an additional hangar to house the numerous displayed aircraft.  The planned expansion would bring in over 224,000 square feet, or nearly the size of four football fields.  As is the case with most aircraft hangars, central pillar supports cannot be used due to the need to maneuver aircraft with large wingspans.  To accomplish a roof with this much space, large curved roof trusses must be built to arch over the needed open area.  For the museum expansion, W16x45 steel beams were rolled the easyway to concentric radial dimensions.  The bowed arch trusses, which have a span of over 300 feet and reach 80 feet in the air at the peak, posed several challenges.  Among the future occupants of the hangar, one will be able to visit a full-scale representation of a NASA shuttle.  The hangar design team needed to pre-plan placement of exhibits, as the shuttle exhibit’s tail fin reaches high enough to interfere with some of the structural steel.

The curved steel beam trusses were delivered as over 300 separate beams between 48 and 54 feet curved length.  Erecting the completed sections of curved trusses was also a significant undertaking, as well as installing the roofing panels.  To make these curved panels, 16” wide sections were formed over 300 feet in length, rolled and formed from mill stock to provide sections of seamless cover.  The extensive project will also be the future home of several planes used by former Presidents, including the aircraft that served as Air Force One on the day of President John F. Kennedy’s assassination. 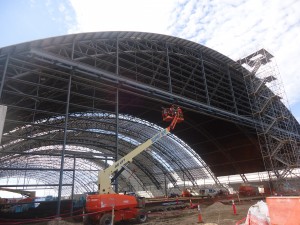