The Difference Between Camber and Sweep

A common way to put a camber or sweep in steel is to cold roll that product in a pyramid style three roll section bender. The rollers push the stress in the steel product past the yield point that will then produce a permanent strain. For cambering this will produce a uniform curve that is ideal in counteracting the effect of uniform loading. For example, cambered beams may offer superior support in a bridge by reducing any sag or downward deflection from the weight of an asphalt road. One might put a sweep in a beam to improve the aesthetics of the project. A sweep can enhance the appearance of a particular structure greatly, without compromising its function. For example, a canopy may be supported by a beam with a sweep that creates an edge curve. Adding a sweep or camber in a member will increase its yield and tensile strength.

The difference between a camber and sweep versus bending and rolling is that a camber and sweep have a rather small mid-ordinate rise, say 1/4 to 2 inches over 40ft, while bending and rolling have large and small radii, say 2ft radius to 300ft radius. The terminology has a lot to do with how a detailed fabrication drawing is drawn. For example, if a rectangular tube has a sweep the drawing will be detailed with a 2-inch rise on a 20ft chord, but when it is curved the easyway it will be detailed showing a 300ft radius with 20ft good arc. Both examples given will produce that same curvature but are detailed differently. 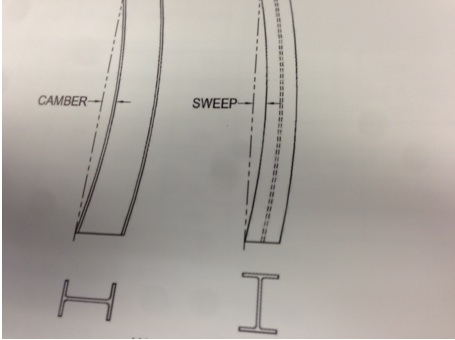