Beam Bending: What Is the Longest Beam That Can Be Curved?

Perhaps this beam bending question asked by architects, engineers and fabricators is best divided into two parts:  What are the longest beams that are produced.  And, given those lengths, is there a length limit as to whether they can be curved. 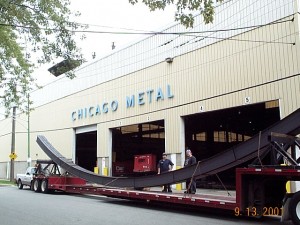 The length limitation of Steel Dynamics (SDI) is governed by which of their 2 mills (heavy Section (HSM) / medium Section (MSM) produces the beam.  Off the HSM, SDI can and does roll and ship by rail or truck up to 125’ (assuming routing can allow).  The offset for additional length is generally shipping costs: reduced capacity on rail cars to allow overhand swing (therefore more $/ton), extra $$ for idler cars, etc., and by truck: cost of permits and escorts.  Off the MSM SDI is currently limited to 75’.

So, given that heavy beams can be produced to 125 ft. long, can they be curved?  Generally beams this long would not be rolled to a tight radius unless the length was chosen to provide a good yield of  shorter curved segments.  If the beam were to be shipped in one piece, too tight a radius would create shipping width limitations. 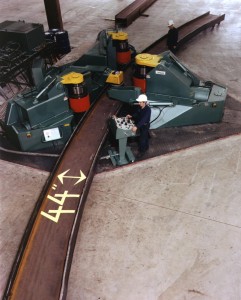 Another restriction arises from shipping the long curved beams.  The length and width of the curved beams would be limited by the capacity of a particular truck.  Then there are state restrictions. A common “legal” load without permits is 102in wide x 52ft long.  With permits (which vary from state to state) a loa–under several restrictions–can be as wide as 16ft, as long as 145ft, and as heavy as 120,000lbs (trailer and load).  Length is not usually an issue.  The defintive answers can be obtained through those companies who specialize in oversize loads.  They can tell you the limits of their equipment and the limits of  each state’s permits.

So . . .  very long and very heavy beams can be produced, curved and shipped.  The architects, engineers and fabricators who have inquired about what can be done can use this information as they seek the optimal designs for their projects.