Sometimes rolling jobs are so unique, the material must be produced at a mill months in advance for projects with drawings that have yet to be officially approved for fabrication.  Sometimes these jobs require collaboration between sales divisions across borders and oceans; but almost never does a job requiring this level of work and preparation consist of an order for 1 piece of structural steel, curved to a single easy-way radius.

A section of structural steel that all of us in the industry know exists, but is too large to be produced stateside, will be used in a new academic building on the north side of Chicago as a support member for a roofing system. This beam is the mammoth sized Wide Flange W40x503. This 42 inch tall, 16 ½ inch wide, 64 foot long behemoth weighing just over 32,000 lbs was required to be curved about the easy axis (Y-Y) to a 121 foot centerline radius with an arc length of around 54 ½ feet. The price per pound on a beam of this size left almost no margin for error in overestimating the length required to produce the requested arc. In the rolling industry, “pick-up”, or extra material required on each end to produce a certain amount of arc length, can vary based on the machine to be used and the radius of the required curve. Estimating and operations worked together to agree upon a length good enough to produce what was required by the customer. Once it seemed as though every aspect of material specification and procedure for production was covered, an order needed to be placed.

This order required a mill rolling nearly 4 months in advance all the way across the Atlantic in Luxembourg. Weeks and weeks of back and forth communication between CMRP and inside sales reps for the mill took place not without a few bumps in the road of course. Roll dates were pushed back, shipping vessels were missed and time estimated for quality control and loading/unloading at ports and docks turned out to take longer than some had hoped for. At one point, alternative shipping and production options such as utilizing a cargo plane or even assembling a built-up section from individually curved plates had been brought up. But as we began to approach the estimated deadlines, the drawing approval process had yet to surpass the updated shipping schedule and so it seemed that both construction and production schedules were back on track. The 32,000 lb beam was shipped on a Chinese bulk carrier cargo ship measuring 656 feet long by 78 feet wide. The 820,000 lb ship sailed across the Atlantic from Antwerp, Belgium to dock at Burns Harbor, Indiana in just about 2 weeks time. The oversize load was trucked from Burns Harbor, Indiana to Chicago, Illinois on a flatbed trailer split to extend the full 64 foot length of the beam.

The W40x503 beam has a 1 ½ inch thick web and 2 ¾ inch thick flanges. Only two section benders in our shop have the muscle to curve something this heavy, one of which could not accommodate a 42 inch beam height, the other having flange slots on its rolls that were too narrow for the flanges on this beam. Because the flanges were too large for the grooves in the rolls, the beam would not be supported enough to eliminate the potential for tilt or rotation in the machine. A very careful eye and skilled hand was required to man the controls and guide the beam back and forth through the rolls, watching for leaning or slip as the piece moved along. After a full day and a half of work and nearly 10 arduous passes through the rolling machine, one of the largest beams to have ever been unloaded at this facility was finally complete and ready for its next stage of offsite detailing. 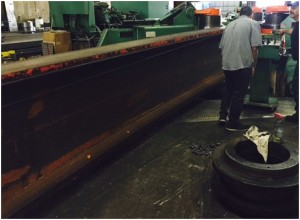 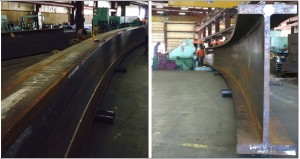 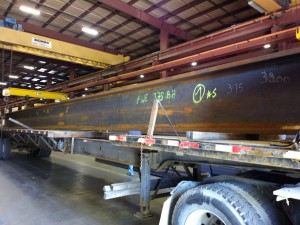