The Only Problem was Time

It was Thursday, March 29th just a day before the Easter Holiday weekend and while the phones were quiet for most of the day due to a vast majority of the industry gearing up for time away from the office; just after lunch the expected lone phone call rang through seeking much-needed help in a time of despair.  The project was 24-02 49th Ave, Long Island City, NY. The building was purchased as a combined office/warehouse in 2016 but plans to turn the building into creative office spaces took a few years to come to fruition.  In renovating the space, original concrete columns/pillars were to be reinforced with 1” rolled/curved steel plate. Sounds simple enough…but the kicker on the project was the schedule/timeline. The problem the customer faced was a final completion date set on the job for mid-June with no exceptions to the schedule. Any delays would be imposed as back charges; thus making the expedited delivery of these members of the utmost importance. 2 months to complete the reinforcement portion of the project didn’t seem like much to bat an eye at until the customer revealed that the members required for the reinforcement portion of this job were not even detailed or fully figured at the point in time. Due to restricted access to portions of the building caused by the demo and other trades in certain locations of the project, required members were to be figured and detailed as access became available.

With consideration that each plate was specific to its location and in turn was unique in its size, shape, roll geometry and the spacing and location of necessary slots cut into the plate; plates had to be cut from carefully developed .dxf files based on field measurements taken just days/hours before the prints were generated. The initial request for sequence 1 was for 20pcs of curved 1” plate with a promise of something like 13 more sequences to come; this sequence was only for 1 of the 7 total stories of the 850,000 rentable square foot property. As mentioned previously the most important aspect of this request was delivery, in which all 20pcs had to be delivered on Friday, April, 6th of the following week. At a time where most shops lead times are pushing 2-3 weeks, a 4 day turn around was demanded of CMRP. This allowed for only ½ a day to quote/price and figure the project from a bender roller standpoint and only 4 days to process the entire order: revising and adjusting developed .dxf files; issuing trusted supplier Hot Rush PO to cut plates with slots per prints; receiving then rolling all 20 plates and marking per print; and lastly shipping to final destination. In years past this most definitely would have been achievable, the schedule would still have been tight but easily achievable. This year due to looming tariffs, massive increases in steel prices and issues with DOT imposed regulations on trucking; there has been much panic buying, thus increasing lead times at almost every stop along the supply chain. 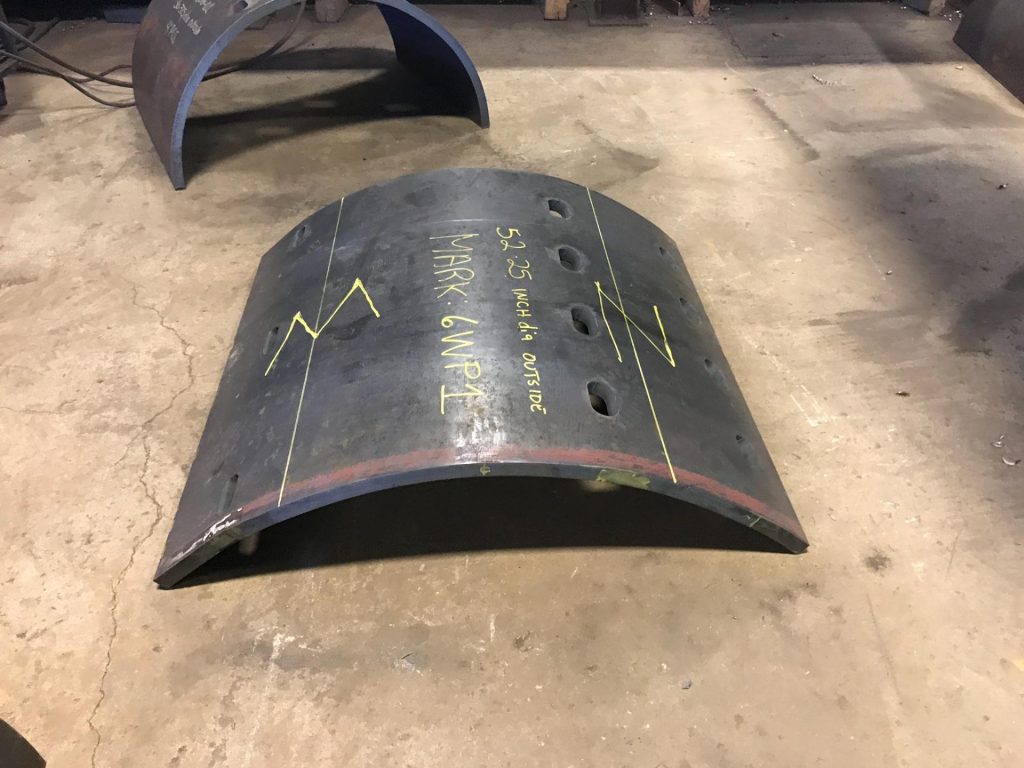 Due to the holiday weekend and time restraints the Thursday before, the official order came in from the customer to CMRP on Monday, April, 2nd. The plate was ordered that day to arrive the morning of Wednesday, April 4th, giving CMRP only Wednesday & Thursday, April 4-5 to complete the rolling of all 20 plates. To make the schedule even tighter the plates had to be done by early afternoon on Thursday, April 5th in order to make a dedicated truck that was able to travel overnight to deliver the plates to the customer in Amityville, NY next day on Friday, April, 6th. Due to proper execution and careful planning and working with dedicated vendors, CMRP was able to get the customer their order on time!  Fast forward to today, the project is in its final phases. Throughout the past 2 months, all releases on further sequences have played out much the same as the 1st order; process and complete the rolling job and ship with a 1 week turnaround time. In working with the customer and with our trusted vendors, and utilizing our massive capacity CMRP is capable of pulling off what some call the impossible. This is not what we consider special, one-off cases….this is what we consider to be business as usual.