Architecture, Construction, and Engineering are three of the most highly technical and collaborative professions you can pursue an education in today. The design and safety standards that are developed and continuously reviewed are some of the most widely respected standards you will find in any country or industry. These professions aren’t only responsible for future infrastructure and building projects, but also help to retrofit, rehabilitate, and respond to emergency situations regarding existing structures, aiding to prevent the risk of collapse or failure due to age or natural disaster in any region of the globe. It takes a technically proficient and capable individual to produce the high-quality work expected from firms that have established reputations in the industry for these necessary services.

A quality education from a highly respected and accredited collegiate program is almost a requirement for most candidates to even be considered by firms. What is almost as important as the education is the quality of the individual. Finding these quality individuals can be a challenge when you can only depend on brief face-to-face interviews or piles of resumes from which to base your selections. Fortunately for the industry, one pioneering firm took it upon itself to reach out to a much younger audience and establish lasting connections with potential talent long before they were lost in other fields or forms of work.

Charlie Thornton, founder of structural engineering firm Thornton Tomasetti (TT), began the ACE Mentorship Program of Greater New York in 1994, which was established to educate and develop high school student’s interests in careers in architecture, engineering, and construction (AEC). The program brought industry professionals (mentors) and students (mentees) together to offer additional education and a learning environment to foster their creative and critical thinking skills. Students were taught about the ins and outs of each profession and what the mentors did on a daily basis as professionals in these industries. They discussed typical design and construction techniques, visited real construction sites and design offices, and worked together to design a unique solution to a real world design problem using real world design and budget limitations. Working together with friends and peers their age, students received a firsthand look into the office lives of architects, engineers, and construction managers by working closely with the real professionals themselves.

Today the ACE Mentorship Program has spread from its roots in New York, to more than 200 cities in 38 states nationwide. I myself am an alumnus of the Chicago ACE Mentorship Program. The Chicago affiliate found its start at Thornton Tomasetti’s (TT) Chicago office which was once home to the offices of Cohen Barreto Marchertas (CBM) before being acquired by TT in 1993. CBM founder, Eli Cohen, was the originator of the popular concrete core and steel frame construction methodology seen in many, if not most, high-rise structures today. It enabled the industry to design and build taller, faster and lighter than ever before. Responsible for the success of hundreds of projects and around 70 high-rises, Cohen Barreto Marchertas helped to significantly shape Chicago’s iconic skyline as it stands today.

My personal experience with ACE Mentorship Program Chicago started in 2007-2008 during my senior year of high school. I was a member of Team 1 which consisted of around 20-25 students from various CPS high schools across the city and mentors from architectural firm Destephano + Partners, Power Construction, and structural engineering firm Thornton Tomasetti to name a few. That year’s project was to develop a conceptual design for an Olympic Village and Transit Hub to be built at one of the potential sites for a possible 2016 Olympic Games in Chicago. For roughly 17 weeks, students and mentors met once a week at the offices of the participating firms to learn how design, engineering, and project planning and scheduling mesh together and work with and against each other day to day in a live building project. The program concluded with a final presentation event to showcase completed projects and to award scholarships and internships to outstanding students. I received the Eli Cohen Scholarship and an 8 week paid internship at Thornton Tomasetti’s Chicago office. Over the summer of 2008 I worked under many engineers at the company and learned a great deal about the industry and the standards of practice and collaboration that happens between differing professions and trades on a job or project. After my internship, I began coursework to obtain a Bachelor of Science in Architectural Engineering at the Illinois Institute of Technology. Fast forward to today, I currently work at Chicago Metal Rolled Products as an Estimator and Project Manager. I get to use my engineering background and technical know-how to analyze and formulate instructions for rolling and forming steel and alloys of various grades and strengths into simple as well as complex shapes and curves. Curving steel truly is as much of an art as it is a science, and this is what brings about new challenges each and every day.

Although I had been a volunteer junior mentor for ACE Chicago during college and had held a presence at ACE fundraising luncheons each year after my involvement in the program, it had been a while since I had the opportunity to contribute directly as an alumnus to the program which had contributed so much toward my own personal experiences and accomplishments. This summer, a past mentor of mine reached out to me regarding the ACE Mentorship Program Summer Design Build Team and their outdoor classroom project which was under construction at the time. Matt Snoap of bKL Architecture LLC, heads the summer design-build program each year and was looking for help in obtaining four 2in OD x ⅛in wall Aluminum 6061 Tubes rolled to a 180” centerline radius with custom end connections for a canopy system. The rolling of these tubes would present no issues, but the custom end connections were critical to the aesthetics and installation of the structure, so special attention was made to this area of the project. The entire student design team was invited to our office to discuss the overall goals and expectations for these rolled tubes. Together we discussed how they arrived at their design concept and reviewed the physical model of the canopy they brought in. Spanning in an arch from opposite corners of a square space, the canopy required each of the two pairs of curved tubes to be installed at opposing 45-degree angles from the vertical plane; each pair crossing over the other in an X formation. The roll radius had to be derived from a specific view plane in order for the canopy to appear as modeled when the tubes were installed at 45 degrees. The end connection of each tube was specified to be flattened 10 inches and bent out of plane of the curve so that the ends could be bolted to and run flush against a wood plate orientated diagonally across the space to the opposite corner. The connections were originally designed to be split or cut down the center of the tube and flattened, however, it was easier to ensure the tube flattened evenly when it was kept whole and not split first.

After trial bending and forming, it was concluded that a stress relieved tube performed the best for the rolling and flattening operations. Without stress relieving, aluminum remains stiff and brittle and will crack and splinter when smashed. With stress relieving, aluminum becomes softer and will withstand the smashing of the ends without any cracking even if the edges become creased. Stress relieving relaxes the material and makes it more pliable while retaining most of the materials natural strength. We were able to produce perfectly curved parts with pancake flattened and bent ends without any sign of splitting or material failure. With the wood columns already installed at the site, the tubes were purchased, heat treated, rolled and formed within 48 hours. Completed tubes were shipped to the site where two holes were drilled at each end and the tubes were bolted to the tops of the columns all within 2 hours’ time. The dimensional accuracy obtained from the ACE team’s computer generated 3D model and a clear set of manufacturing instructions from the project manager to the shop resulted in a perfect fit and hassle free on site installation. 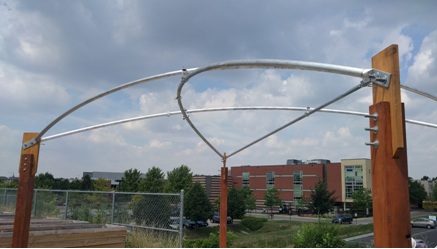 As a student of the ACE Mentorship Program, you will quickly learn that whether you are an architect, engineer or construction manager, these three professions require a uniquely collaborative work ethic that can develop projects from the drawing board to the floor boards with speed, quality, and efficiency. Good or bad communication between disciplines can make or break a project. The skills that are required to create a successful design, calculation and building approach can be introduced and ingrained in one’s mind at a ripe and early age to ensure the future of the industry and built environment continues to reach the levels of quality and sustainability required of modern civilization for years to come.