Steel cones have many uses:  as ornamental iron components, as funnels, as chutes, and as transitions in metal ductwork to name just a few.

Steel plate is formed into cones primarily by either rolling the plate in a plate roll or forming the plate with radius dies in a press brake.  Some companies “step brake” lines into the metal, but this usually leaves kinks at each place the plate is hit.  Cones can be produced from a single piece of steel or in segments.  For example, a cone could be fabricated by joining together two 180 degree cone segments.  Or, a longer cone could be constructed by joining two cones lengthwise.  Or, a cone could be constructed from twelve steel plates.  The examples below provide some idea of the range of possibilities. 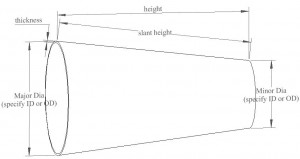 There are limits as to the desired dimensions that can be achieved depending on the machinery involved, the operator, and the raw material.

The cone in the picture below has a minor outside radius of 8.25in, a major outside radius of 30in, and a height of 56in.  The material is 7ga mild steel.  This cone is for a “high end” residential fireplace in Minnesota.  This cone is fairly difficult to make because of the extreme difference in the major and minor diameters over a short distance.  It is an example of one-piece construction.

Each of the cones in the pictures below is made from four pieces of 3/16 mild steel.  Assembly of the cones shown below creates two size of cones:

Each cone assembly is comprised of 4 segments:  two 180 degree cone segments to be joined to form a 360 cone which is then welded to two more 180 degree segments end to end to create longer cones.

The large cones shown in the picture below are 9ft tall and are made out of 5/8in plate.  They are two of 24 each 180 degree cone segments which when welded into full cylinders and then welded end to end will form two tapered smokestacks more than 50ft high.

Rolling such large pieces reduces the number of welds that smaller sections would have required to make the assembly.  All edges on these cones have weld-prep bevels.

These are just a few examples of how steel plate can be formed into cones from one-piece to two-piece to twelve-piece construction.  From extreme tapers to gentle slopes.  And from 7 gauge material to 5/8 plate.