Bending thick steel plates to a tight radius is not an easy task.  There are many variables to consider such as thickness, surface and edge condition, as well as the material’s chemical composition. Plate bending, also referred to as plate rolling, is a process whereby a force is applied to a plate causing deformation along the bending axis forcing the plate to bend at a desired angle.  At that moment of bend, the material is experiencing tension, wherein it expands on the outside surface of the bend, and compresses, or shrinks, on the inside. 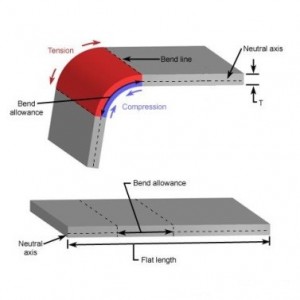 Upon the release from the bending force, the residual stress in the material will cause the plate to spring-back. To compensate for the spring-back, plate needs to be bent to a greater angle than the angle required.  An experienced operator can calculate the amount of spring-back to be expected based on several factors, helping to speed material construction with fewer attempts. 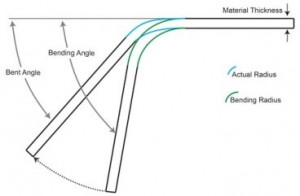 Typically, plate bending is performed on a press-brake. A press brake contains two tools: the upper tool – known as “the punch” and the lower tool – known as “the die”.  The plate to be bent has to be positioned over the die and held in place while the punch is lowered onto the plate and the applied force causes it to bend. The bend angle is controlled by the depth to which the punch forces the plate into to the die. Most common plate bending is called V-bending where the used punch and die tools are V-shaped. 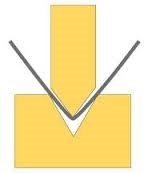