A growing market for those of us in steel?

After the earthquake, tsunami and subsequent damage to the nuclear power plants in Japan, Yucca Mountain is in the news again. Planned as a repository for spent fuel rods from nuclear power plants in the U.S., after 38 billion dollars were spent on construction, in February of 2011 the Obama administration moved to defund and permanently prohibit licensing of the project in the future.

Concerns about the safety of how we handle nuclear waste are causing the state and federal authorities to revisit the efficacy of the Nevada nuclear burial site and explore other underground sites.

One of the interesting aspects of construction at Yucca Mountain is that when the enormous boring machines cut a tunnel some 30 feet in diameter, they encounter different geological conditions.  Sometimes the machines bore through solid rock, a situation that is desirable since no auxiliary supports are required.  There are times, however, when the machines encounter not solid rock but soft, gravelly stone, and curved steel tunnel supports are required.  And required quickly.

Both for efficiency and to maintain the correct alignment of the boring machines, it is desirable to run them with as little down time as possible.  That is why, when curved steel tunnel supports are needed, they are needed fast.  Unlike tunnels that are not intended to store nuclear waste, the tunnels at Yucca Mountain are intended to bury the dangerous material so that any leakage of the containers would also be contained under the mountain.

Typically, mining engineers would take core samples from above to determine the condition of the ground below—whether steel tunnel supports would be required or not.  In the case of Yucca Mountain, however, taking such core samples would be prohibitive because these vertical borings would then be ventilating the tunnels below; thereby defeating the purpose of burying the nuclear waste below the mountain.

Typical beam supports at Yucca Mountain are W8 x 31# beams curved the “hard way” (x-x axis, or against the strong axis) to a 25 foot diameter. 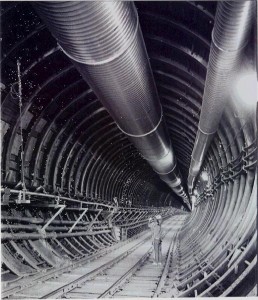 Whether Yucca Mountain is reactivated or not, steel tunnel supports will continue to serve their function in any underground storage system or mine.

Also in the news about mining is the issue of China’s dominance of the rare earth market. This market is critical to producing component parts for everything from cell phones to United States missile systems.  Recently, a significant discovery of rare earth materials in the Mohave Desert may bode well for the U.S. being less dependent on other countries for our supply of these valuable materials.

Lastly, with the resurgence of coal as a primary source of power, a greater number of  steel tunnel supports will be required for underground mines.

Curved steel supports are also used in all sorts of infrastructure projects.  For example,
steel beams often encircle steel piling to create cofferdams.  A cofferdam is an enclosure within a water environment constructed to allow water to be pumped out to create a dry work environment. Such construction allows for efficient  and effective bridge and dam construction.

Perhaps those of us who work with steel will find a growing market underground or even underwater.