Most nuclear and other power plants must be engineered to safely shut down in the event of seismic activity or other natural or man-made disruptions. Others, however, must become operational within seconds after such a disruption.  A case in point is the power plant supporting our missile defense system in Alaska.  One day a few months ago, three separate companies, within hours of each other, called us because this power plant had a wind-vortexing problem that might be solved by helical bending.

Excess wind was causing five exhaust stacks to become unstable.  The Boeing Company, along with the others, facing rapidly approaching deadlines, designed a solution for the vortexing problem that required helical strakes.  The strakes were to wrap around the stacks at a pitch of 5 times the diameter of the pipe. As Dan has blogged for us, this is a very common solution to this problem. 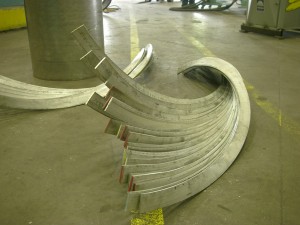 This application, however, had additional challenges particularly regarding the angle the bars were coming off the stack. In a typical application strakes would be welded directly to the pipe. This gives fabricators the ability to work with the strakes to get them to fit properly. Due to several factors (the availability and grade of steel, the extreme temperature variation, and our manufacturing capabilities among others)  the Boeing design called for the strakes to be attached at 180 degree segments with 3 clips. 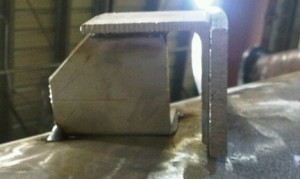 The clip design meant that the amount the fabricators would be able to fit on site would be limited. To ensure every piece would work, we performed a 100% fitment check against an identical template which we also produced and hit all three points at 90 degrees within a very tight tolerance. 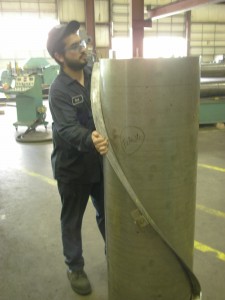 Our shipping department then safely packaged the strakes to ensure that the pieces were not altered during the overnight shipment to Alaska. They were picked up by the customer’s procurement team and on sight for the fabricators to begin installation in Alaska the day after they were completed in Chicago xiao cheng. Two separate shipments were done so that while we were finishing making the strakes, the first exhaust stack could begin to be fitted. 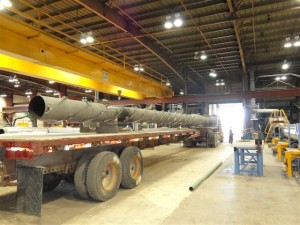 Through continual communication and the efforts of multiple people, Chicago Metal was able to do our part to assist the engineers, fabricators and coordinators of several other companies in providing for the safe and constant operation of a part of the intercontinental ballistic missile defense system. (https://www.mda.mil/). 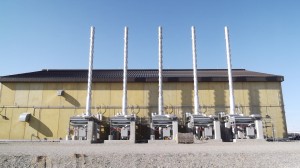