When steel is curved, it is important to keep the stress-strain curve ratio for mild steel in mind. Below is a stress-strain graph that reviews the properties of steel in detail.

If tensile force is applied to a steel bar, it will have some elongation. If the force is small enough, the ratio of the stress and strain will remain proportional. This can be seen in the graph as a straight line between zero and point A – also called the limit of proportionality. If the force is greater, the material will experience elastic deformation, but the ratio of stress and strain will not be proportional. This is between points A and B, known as the elastic limit. 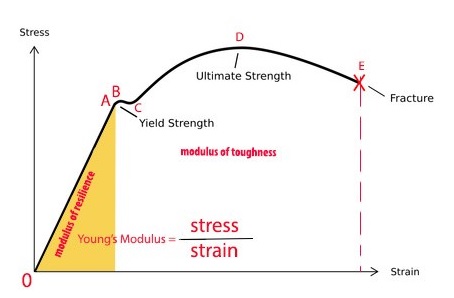 Beyond the elastic limit, the mild steel will experience plastic deformation. This starts the yield point – or the rolling point – which is point B, or the upper yield point. As seen in the graph, from this point on the correlation between the stress and strain is no longer on a straight trajectory. It curves from point C (lower yield point), to D (maximum ultimate stress), ending at E (fracture stress).

Now, we’ll look at each individual measure on the graph above and explain how each is derived.

The symbol of stress is σ (Greek letter sigma). For tensile (+) and compressive (-) forces. The standard international unit of stress is the pascal (Pa), where 1 Pa = 1 N/m2. The formula to derive the stress number is σ = F/A.

The definitions below are important for understanding the Stress-Strain interactions as seen in the graph.

Chicago Metal Rolled Products sets the industry standard for adherence to the stress strain curve for mild steel and other materials.  Contact one of our estimators today.