Once structural beam bending is completed, challenges arise regarding how to ship what can be very long and very heavy loads.  Major steel mills like Nucor Yamato and SDI often employ pole trailers to ship their jumbo beams in lengths up to 105ft. and beyond.

Depending on the radius, length of beam, and weight, a load of curved steel can be put together on a pole trailer for safe and cost-effective transport.  A load of curved beams was recently shipped this way from Chicago to Texas for a pedestrian bridge. 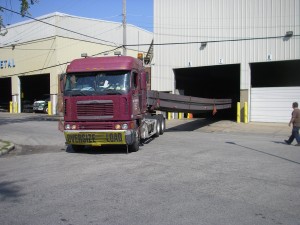 Four W36 x 160# x 65ft, and one W36 x 160# x 60ft were loaded with one W36 x 194# x 65ft.  All of the beams had both sweep and camber (i.e. they were compound bends) and one had a reverse camber.  And each one had a different radius.  Nevertheless, after being carefully loaded, 53,410 pounds of steel was transported on the pole trailer with the beams supporting themselves.

The beams were loaded in a fashion that we sometimes call a “smiley face,” i.e. with the concave side to the sky.  Since there was more sweep than camber, the load looks most like a load of easy way beams.  The major benefit of using the pole trailer is that it can carry a greater load than a flatbed trailer.  A normal flatbed might have a maximum weight limit of 48,000 pounds while a pole trailer can carry as much as 53,500 pounds. 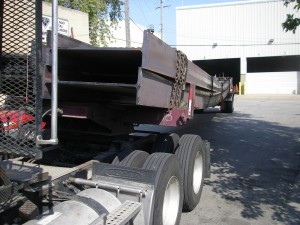