One of the most versatile and common methods to bend pipe and tube is rotary draw bending.  The radius of such bends is often described as, for example, “2D.”  A 2D bend is one whose center-line radius is equal to two times the outside diameter of the pipe to be bent.

Rotary draw bending involves clamping on the outside diameter of a pipe and drawing it over a form whose radius matches the desired bend radius.

Rotary draw bending often employs an internal supporting mandrel and a wiper die to prevent wrinkling on the inside wall of a tight bend.  Some rotary draw machines can perform both push bending and rotary bending with a single tooling setup. 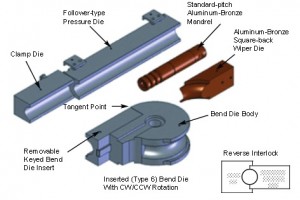 Tube bending is a matter of handling a handful of procedures and variables.  The bending process can cause the material to get thicker where the metal is under compression and thinner where it is under tension.  Too much thickening can result in wrinkles and too much thinning will ultimately result in failure.

The machine operator needs to look at clamping pressure when bending.  If there is not enough pressure, the tube will slip during the bending process.  If too much pressure is used, then that will cause the tube to collapse if a mandrel isn’t used and to wrinkle if a mandrel is used.  The problem occurs when metal flows into areas where it isn’t supposed to go.  Successful bending comes down to proper material containment while at the same time reducing drag.  It is critical to know every characteristic about the tubing:  shape, size, wall thickness, tolerances, yield strength, tensile strength, and ductility.  This information will help assess if the material will be able to be formed to the desired bend radius.