Here in Chicago, and throughout the country, the craft beer industry has seen massive growth over the past decade in particular.  In 2014, for the first time, small and medium-sized breweries rose to 11% of the beer produced in the US.  This was up from 7.8% in 2013.  Sales of craft beer rose 22% to $19.6 billion per numbers released by the Brewers Association, an organization of craft brewers.  As the demand rises for craft beer across the US, so does the demand for the brewery equipment.  The demand is so great that some manufacturers have waiting lists that are months long for components including steel component parts.

One of the most common items seen in craft brewing setups, are the steel tanks used for a number of stages in the brewing process.  Frequently, these tanks are made from curved stainless steel, useful for its metallurgical properties, as well as the aesthetic look.  You can see that both rolled cylinders and cones are needed as well as curved tank caps are often used in the design of these custom pieces.  Demand for brewing setups of different volumes means that these tanks need to be made in a variety of different sizes, and of varying material thicknesses.

As well, later in the production of the craft beer, you can encounter curved steel in other areas.  Rolled sheet metal and curved angles may be used in the production of a bottling or canning line.  The automated nature of these lines enables breweries to quickly ramp up their output, helping to increase sales and profits.  Curved steel can be used to customize the shape and direction of the bottling line to fit into existing brewery space, which may be limited as the company expands. 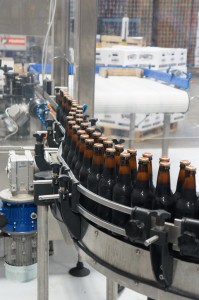 Also, one of my personal favorite uses of curved steel in the craft beer market is the barrel-aging component.  Many great breweries are experimenting with aging their beers in barrels that previously were used to hold anything from bourbon and brandy, to wine and tequila.  This imparts additional flavors to the beers and many customers will travel across the country to try out the rare and limited editions.  Wooden casks like these have been around for many years, but now there is increasing demand for more to be manufactured, and they each require several bands of steel rings rolled the easy-way to hold the barrel together.

So, these are just a few of the ways curved steel components are being used in the craft beer industry boom of the 21st century.  And of course there are many more exciting and creative uses for aesthetic elements of rolled steel in the decoration of brewery tap rooms and bars across the country.