Locating a Man of Steel to Help with your Steel Bending

In recent years, the film industry has seen a steady rise in the popularity of superhero movies.  This week, one of the most popular superheroes returns to Chicago to film his latest movie.  When film makers wanted to frame the look of the Superman universe, they turned the small town of Plano, Illinois into Clark Kent’s hometown of Smallville, Kansas.  The city of Chicago also saw connections made to the Man of Steel, as the Willis Tower and Chicago Board of Trade building were used for the interior and exterior look of the Daily Planet in Metropolis respectively.  Interestingly enough, the Chicago board of Trade was also the building used for Wayne Enterprises in the last few Batman movies.  Maybe the disagreement between the two icons in the new Batman v. Superman movie is property related?

Whatever the case may be, Chicago is again home to the Man of Steel.  Although you don’t have to be from the planet Krypton in order to bend a steel beam.  The real trick is to have a powerful beam bender and skilled operators to run it.  One application where beam bending comes into use is the straightening of beams after they have been heat treated.  Occasionally a heat treating process can cause a beam to fall out of mill tolerance.  The beam can end up seeing unintended camber, sweep, and even twisting from the process.  In these cases, a trained beam bender can usually correct the unintended deviations and return the beam within tolerances, even under extreme circumstances.  Here you can see one such beam in the machine.  The far end is level, showing the high amount of camber, sweep and twist to be corrected.  The beams seen on the left side of the image have already been corrected to specifications. 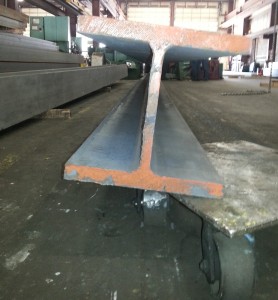 So if you are caught in a situation where it seems like only the Man of Steel could bend that beam, think again.  You don’t always need someone able to leap tall buildings in a single bound.  Locate a beam bender with the knowledge and experience to save the day.