Over the last few years, the amount of attention given to the deficiencies in our national infrastructure has increased drastically.  According to the 2013 Report Card for America’s Infrastructure by the American Society of Civil Engineers, over 200 million trips are taken daily across aging bridges through the 102 largest metropolitan regions in America.  Their report also indicates that one out of every nine bridges in America are rated as structurally deficient, and the average age of the over 600 thousand bridges in the country is 42 years.  Per the Federal Highway Administration, in order to eliminate the nation’s backlog of deficient bridges by the year 2028, Federal, State, and Local governments would need to invest $20.5 billion annually.  However, only $12.8 billion is being spent currently. 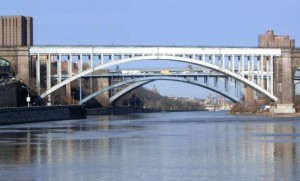 One of the most common requests I see for bridge construction is the cambering of steel beams.  Long span bridges will often have a slight camber added to the beam by engineers to assist with the structural integrity of the overall bridge when all of the additional weight from concrete and traffic is placed on top of them.  This counteracts the deflection and sagging of the bridge as it reaches the center.  Beam cambering is effectively a very slight roll against the strong-axis.  An experienced beam bender can maintain accurate cambering on lengths of over 100 feet.  Often, the restrictions on what can be rolled and cambered are limited by what is able to be transported from the roller to the construction site, and not the capabilities of the roller.

Another example of highly demanded products in beam bending is adding sweep, or easy way curve to the beam.  You can often see the need for easy way curvature in the support beams for entrance and exit ramps, or even in bridges requiring a curved route.  Usually, support beam curvature does not require very tight radial measurements.  Heavier beams may be required though, and not all rolling companies can maintain the larger force required to properly curve these beams.

Over the coming years, as our national investment in bridge infrastructure continues to build, there are some possible advantages.  Advancements in engineering and design have allowed for some amazingly artistic and aesthetic bridges to be constructed internationally, and it would be wonderful to see more of this design in the United States.  One curved bridge that comes to mind for its engineering and artistic beauty is the Gateshead Millenium Bridge in the United Kingdom.  The bridge itself has a wonderful easyway curve when lowered, but the true beauty lies in watching it lift for traffic on the river below.  The entire bridge rotates into the air in a single piece, allowing for minimal energy requirements due to the curved arch counterweight.  Hopefully, we will be able to see some more architecturally beautiful bridges like this in the United States.