The shape of Chicago’s new North Halsted Bridge’s top arch is defined by the equation of a parabola.   While that may sound complicated, the parabolic trajectory is simply the path that any water fountain, thrown ball, or launched Angry Bird follows when subjected to gravity.

The detailers broke the shape into several discrete radii to roll the 1.5” x 30.5” flange plates.  At either end of the parabola, instead of connecting to the roadbed at a sharp angle, radiused “knuckles” were rolled to smooth out that transition.

The 15 inch radius of these knuckles is below the specified radius for cold-forming fracture-critical steel, so those were formed hot (850deg F).  The Chicago DOT, the engineer of record, the general contractor, the structural steel fabricator and the erector all sign off on the procedure.

The North Halsted Bridge will have lights along the length of the top arch.  Obtuse formed steel angle made from ¼” bridge quality steel will carry and protect this lighting system.  The angles will be painted several times in the field (final color blue), and will have other architectural features added. A curved 4×4 structural angle could have performed the same function, but the rounded corner and sloped edges make for an attractive transition from the heavy girder to the lighting. 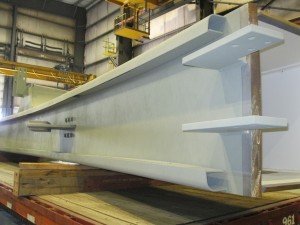 Our customer reported that “The guys in the shop tell me that work with the shroud pieces you provided went quite well.  Thanks for your efforts.”

The new bridge replaces a bascule (draw) bridge which was constructed in 1909.  The bridge has not operated as a moveable one for some 25 years, this canal no longer serving as a waterway for masted ships.

The new bridge is a bowstring-arch design where outward-directed horizontal forces of the arch are borne as tension by the bottom chord, somewhat like the string of a bow that is being flattened.