A 167’-7” tall, Verizon Wireless communications tower, atop Smelter Mountain in Durango, Colorado required a structural upgrade on its 3 existing tower legs. The tower had originally been built with 2” to 3” standard structural pipe as its supporting legs, but after years of cyclical wind loads it was determined that the existing tower legs needed a structural upgrade. In order to reinforce the tower’s legs, engineers devised a plan to weld pipe jackets to the outer half of the existing legs, which can be seen in the diagram below. 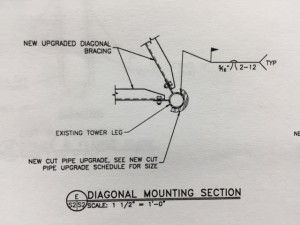 Pipe jackets are a common term for pipe split or halved into 180 degrees. They are commonly used for heat exchangers and or coils welded to the outside of tanks. For this project the split/halved pipes are referred to as 180deg cut pipe. Various size pipes were to be split into halves, from 3” to 5” XXH and then straightened in order to surround the outer half of the existing tower legs. The additional support from the reinforcing 180deg cut pipe increases the stiffness of the tower 12x from its original design.

The pipe was split into 180deg cut pipe by way of a gantry track plasma cutting system. The pipe is fixed in order to restrict its movement when cutting and once the torch strikes an arc the movement of the cutting head is automated to eliminate any deviation from the cut line. Due to residual stresses within the pipe, from its melting and manufacturing at the mill, the pipe springs and twists open once it is fully split.  This is commonly known in the industry as the banana peel effect, and must be corrected by way of straightening. Most structural steel fabricators have the equipment to split the pipe through some sort of track cutting system, either flame or plasma, but it is the straightening of the halved pipes back to within, or better than, mill tolerance that is the challenging aspect of splitting pipe into 180deg cut pipe. For this, most fabricators seek out a bender/roller as they have the necessary equipment to bend, curve and straighten structural steel.  With the proper tooling, a machine which is normally used for bending steel can also be used for the opposite, to straighten out existing curvature.

In this case, a 3-Roll section bender with a special tooling setup was used to straighten the pipe and it was straightened to 1/8” over 10ft of length. After the 180deg cut pipes were straightened, they were bundled and sent to a galvanizer. The halved pipes were then hot dip galvanized for corrosion protection after installation. The galvanized reinforcing pipe jackets were then shipped to a terminal in Durango, Colorado where they were staged for pickup once the steeplejacks were ready for installation.