In the year 118 -125 AD Emperor Hadrian built the Roman Pantheon to replace an earlier temple built by Marcus Agrippa in 27-25 BC. This large structure in the center of Rome looks like a large concrete circular building, in the shape of a round drum, with a large concrete dome on top. The 142’ diameter building has no exterior windows and not until you step inside do you see the light that shines in from the 29’ opening in the roof. The walls of the drum supporting the dome are 19 feet thick. The drum walls have brick arches embedded in the structure made of concrete mixed with tufa and pumice. These drum walls act as internal buttresses equally distributing the weight of the dome. The Pantheon was the world’s largest dome until 1882 when the Buxton spa was built in England.

Massive and simple on the outside the Pantheon is breathtaking on the inside. The diameter is equal to its height at 142 feet. At the top of the dome is the engineering marvel, the 29 foot oculus, which is a round opening intended to inspire meditation on the heavens above. This oculus allows light and rain to fall on the marble floor below. The engineering feat of creating a 142 foot dome with a 29 foot opening in 118 AD, still causes engineers to pause. The walls of the dome are also constructed out of concrete mixed with tufa and pumice, but this mixture was poured over a temporary wooden framework.

To the outside it looks like a concrete dome, but on the inside the walls of the dome are lighted by the use of decorative hollow coffers and thinning of the concrete mixture.  Can anyone calculate the size of the wide flange beam needed to be used as the compression ring for the oculus, if the walls had not been thinned? In modern day 2015, there is a company that can take a 12” x 355 lb wide flange beam rolled in the X-X (hardway) direction to extremely tight radii.  I bet Hadrian’s own workers would have appreciated this ring.  Imagine the architectural wonders the Ancient Romans could have made if they had access to curved steel beams! 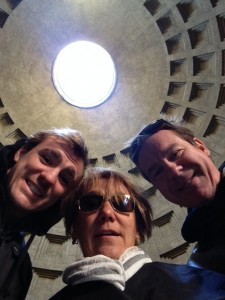