Even after some 37 years in the design, construction industry, from curved steel concrete formwork, to architectural woodworking, onto arched curtain wall glazing systems and finally to rolling a variety of metal sections, I take nothing for granted. From a simple gable roof, urban garage, to monumental skyscraper and everything in between, all have uniqueness about them, with the exception of those containing rolled steel elements. Architects, designers and developers incorporate these features to create bold, stunning and award winning structures, worldwide.

A Frank Gehry masterpiece, The California Science Center Phase II addition, is an absolute magnificent example of 21st century architecture, which features a rotunda lobby, incorporating rolled helical steel beams, spirally crisscrossing in a pattern resembling a futuristic net cladding. Constructed In 1998 this contemporary structure will be certain to impress visitors well into the next century and beyond.

Coincidentally designed by Gehry and across town, is the Walt Disney Museum and Concert Hall. Completed in 2003, the enormous cost over runs of honed stone was redesigned with a collage of curved stainless steel cladding, extremely similar to the ornate headdress at Chicago’s Jay Pritzker Pavilion.  The original mirror polished finish coupled with curvature was so intense, it behaved similar to a parabolic reflector.  Such that neighboring condominium associations petitioned a remedy and in 2005, perpetrator steel panel sections were lightly sanded, drastically reducing the heat producing glare.

Finally while seated el fresco at a seaside eatery, my companion and I commented on gracefully rolled tube uprights, with strung fabric creating a modest, yet ornate sun shade, (or in this instance, moon shade) vaguely resembling tree like shrubbery.  The pure white simplicity stretched out with accent lighting across the night sky back drop created a welcomed and inviting environment with a dash of intimacy. 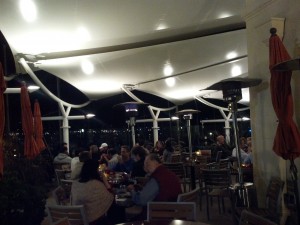 Maybe it’s just me, but things always seem cooler and curvier in California.