Alternately called “spiral stairs,” “circular stairs”  or “helical stairs,”  these structures have served various functions throughout the ages beyond providing a means to move up or down in a building.  And those functions can dictate which way the helix will turn.

Medieval castles were designed for military reasons to have circular stairs turn up-right. Since most individuals are right handed and since the defenders would likely be above the attackers, a warrior coming up the stairs would find his swordsmanship cramped by the adjacent wall.  The defender, on the other hand, would have the advantage of a larger range of motion and a superior height advantage.

There is some evidence that families who were thought to be predominantly left-handed designed their circular staircases up-left, a less common choice.

In both cases, handrails were deliberately left off to allow the defender to push the attacker off the stairs all together.  Also violating all modern building codes, stair treads were sometimes constructed of varying heights to deliberately cause attackers to stumble and fall as they ran up them.

These designs from the Middle Ages were necessarily made from stone and sometimes wood, while many of today’s circular stairs are constructed around a central steel spine with cantilevered steps yielding impressive aesthetics and engineering.  Unlike some of the cramped, stone quarters of circular stairs in days of yore, today’s glass and steel monumental circular staircases are often open to spaces that soar from the floor to the ceiling far above providing vistas for those both on and off the staircases.

Without having to defend against invading marauders, what factors might determine the way a modern circular staircase should twist? Probably most important is how the traffic will flow to the stairway:  Where will the openings to the stairs be located?  Architects also consider the views provided by the choices.

The helical design at St. Thomas University Anderson Center is a truss supported by a single column.   As the pieces are put together, they support each other. With glass sides, the open design will allow individuals in the main, ground-floor room to see their friends coming up or down the stairs.  Furthermore, landings at each level will encourage chance encounters of those who enjoy the student center. 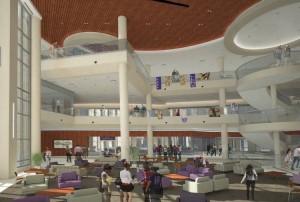 Drexel University in Philadelphia, PA has constructed a similar staircase within a large atrium.  Nearby is a four-story “biowall” comprised of plant material that helps filter the air in the building.  Again, the views of this 1600 square foot vertical garden, the atrium below and the monumental circular staircase itself no doubt influenced the choice of up-right or up-left. 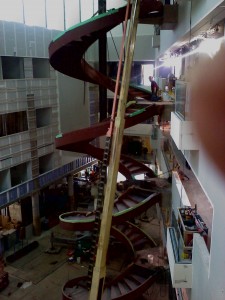 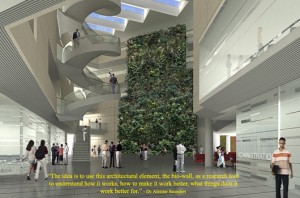