In the past few years the nation’s capital, Washington D.C. / Baltimore, MD has seen a growth/development boom that it hasn’t seen since the mid-nineties. Once considered one of America’s most dangerous cities, it has grown and further developed over the years to become one of the hottest and most desired places to live. Every few blocks appears a new tower crane or a new construction site. 2017 saw over 16,000 construction permits issued, covering major commercial and residential developments with a combined worth of over $9 billion. In all of this it is of no surprise that with a growth of this size and at the current pace, that the casino gaming industry would be taking note; with the intent to capitalize on such a boom. MGM and its newly built state of the art casino, MGM National Harbor, has done just that. With their doors opening late in 2016, MGM National Harbor is a 1 million square foot resort with a 23 story onsite hotel and more than 135,000 square feet of gaming floor space. Before its construction, MGM National Harbor was touted to be the most successful, the most beautiful and one of the largest casinos outside of Las Vegas. In looking at the resorts architectural design it is no wonder that in its 1st year of opening it pulled in a whopping $52 million in revenue. 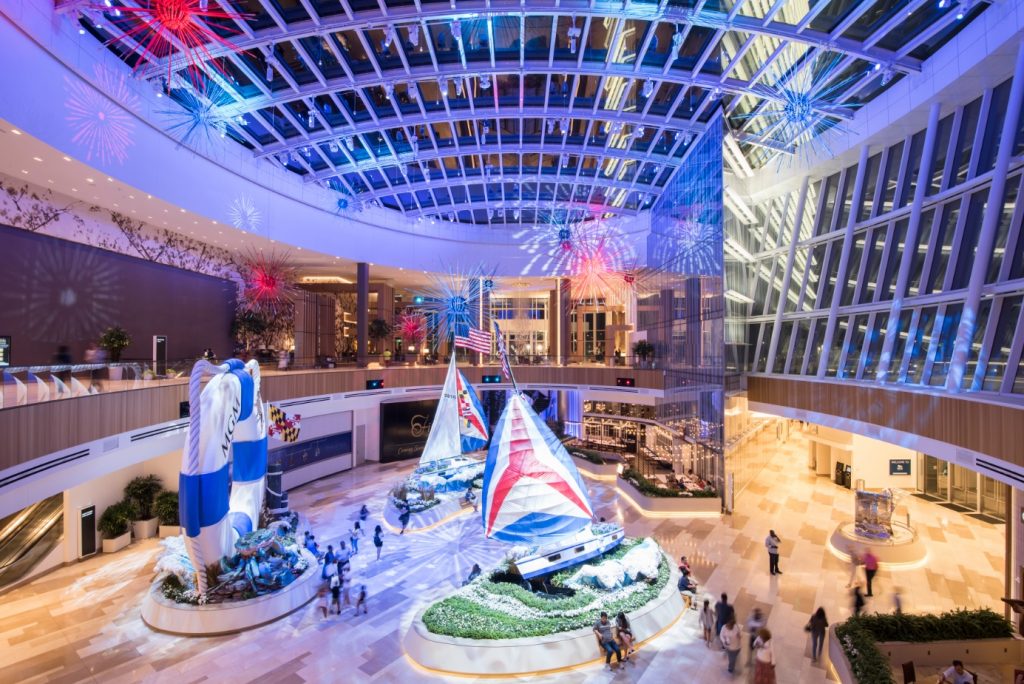 The design done by HKS Architects bases its layout off a central axis in which most of the facility is symmetrical about much like the Capital’s National Mall. Upon entering the grounds the design does well in managing the traffic coming in and out of the resort. The entire casino is perched atop a pyramidal structure somewhat resembling The Great Sphinx of Giza in which the resort’s parking is neatly tucked away under. In exiting the parking structure, guests are moved into the lobby of the resort in which the resort’s on-site hotel and the casino merge into one open communal space. Space is filled with light by design. A massive domed elliptical skylight welcomes guests into a very inviting space. Structurally supported by a box welded steel beam made of multi-radial curved grade 50 steel plate, the sky-light is visually stunning, but even more so gets its appeal from the hotels’ curtain wall which doesn’t simply end at the intersecting point with the domed elliptical skylight. Rather, the hotels’ glass façade continues right through the skylight into the buildings entrance interior; giving the effect of a large room inside of an even larger room, sure to make guests gasp in awe and wonder.

As guests move along the exterior away from the hotel into the casino they will notice sweeping curves along the roof line in which differing size structural steel beams were curved helically and or compound in order to give the casino’s exterior a semi-futuristic appeal like something out of an episode of Star Trek. Although radical in its design the casino looks at place amongst the backdrop of Capitol Hill as it shares its white marble exterior with much of the buildings and statues used throughout Washington D.C.