Pegasus is the horse from Greek mythology, usually rendered as white, which has both wings to fly and divine powers.  Not a bad name for a facility at the Gulfstream Park [horse] Racing Association in Hallandale Beach, Florida.

The owners of the track wanted to update their existing facilities and plan for future enhancements.  Included in the plans was a large dome whose structural support would be comprised of wide flange steel beams curved the hard way (against the strong axis).  W18 x 35 beams and W24 x 103 beams were rolled to a 29′ 1.875″ outside radius as the “ribs” for a dome.

Also, 8″ x 6″ angles were rolled for the compression ring at the top of the dome.

The whole project was one where early involvement by a Bender/Roller (a company that specializes in curving steel) helped achieve the best combination of design, cost, and quality.  The sizes of the steel beams to be curved, for example, went through several iterations before the final sizes were settled on.  One consideration was the ability of Bender/Rollers to roll various size beams to the desired radius.  Another was whether stiffener plates would allow the selection of lighter beam sizes.

As for the future, the owner’s plans envision a large sculpture of Pegasus to appear to be springing off the top of the dome as it attacks a dragon, probably the mythological monster, the Chimera.  No doubt the architects and engineers have calculated–and accounted for–the additional load on the dome. 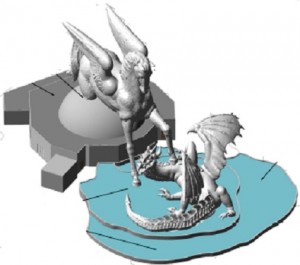